HSA is the most abundant plasma protein involved in the transport of a wide range of endogenous ligands such as fatty acids, bilirubin and heme that maintains a physiological homeostasis that is vital to human health; however, a detailed understanding of the intracellular route taken by albumin was surprisingly still lacking.

HSA long circulatory half-life that is clinically utilised as a drug half-life extension technology, was suspected to be facilitated by engagement with the cellular recycling neonatal Fc receptor (FcRn). FcRn is a heterotrimeric receptor, comprising of a major histocompatibility class I (MHC-I) heavy α-chain and a non-covalent associated β2-microglobulin (β2m) light chain. It has been shown to be responsible for immunoglobulin G (IgG) protection from lysosomal degradation by diversion within an endosomal cellular recycling pathway following a pH-dependent FcRn-interaction. No direct cellular evidence, however, was shown for albumin.

Albumedix has developed recombinant human albumin variants with different FcRn affinity engineered by mutations in the C-terminal domain III. This domain is known to represent HSA’s major FcRn binding site.  The variants in conjunction with low and high FcRn-expressing cell lines were used as tools to elucidate the role of FcRn in HSA cellular trafficking. A combination of flow cytometry, quantitative confocal microscopy, and an albumin-recycling assay has now given direct demonstration of an FcRn-driven endosomal sorting pathway for cellular recycling of albumin.

Associate Professor Ken Howard, head of the NanoPharmaceutical Lab, “This work has important implications in both basic and applied research by understanding the cellular trafficking of this all-important protein, in addition, to harnessing the natural properties of albumin for improved drug performance. This work is the result of a successful long-standing collaboration with Novozymes and Albumedix now focused on the application of molecular engineered albumins for control of the therapeutic profile of albumin-based drugs”. 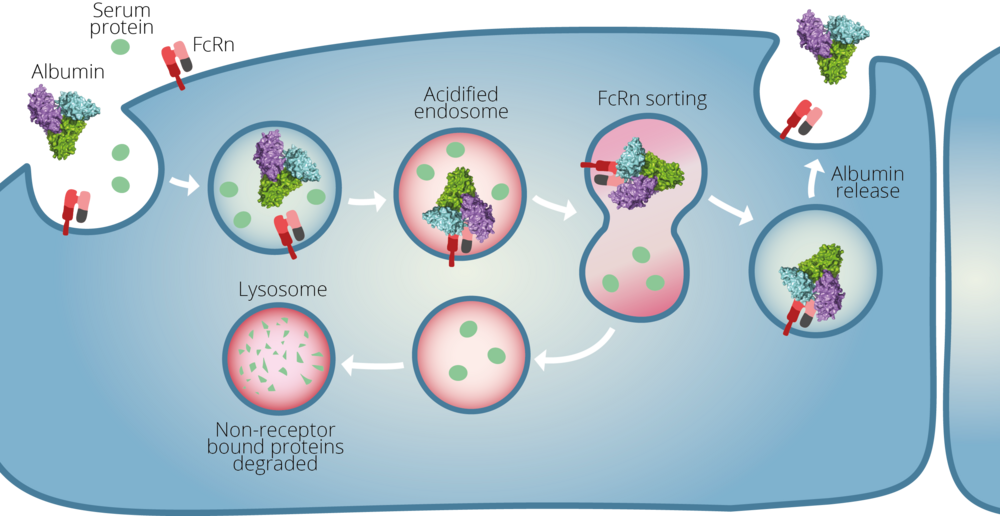