The BioNMR group publishes how they determine the individual protonation states of amino acid side chains in proteins.

In a forthcoming issue of Angewandte Chemie, Dr Yuichi Yoshimura and Associate Professor Frans Mulder publish a novel method to determine the protonation states of individual arginine side chains in proteins by NMR spectroscopy, and shed light on a controversy surrounding the photoreceptor protein PYP. Direct observation of 13C, afforded by the ultrahigh-field 950 MHz magnet and cryogenic probe head at iNANO, were critical for this success. 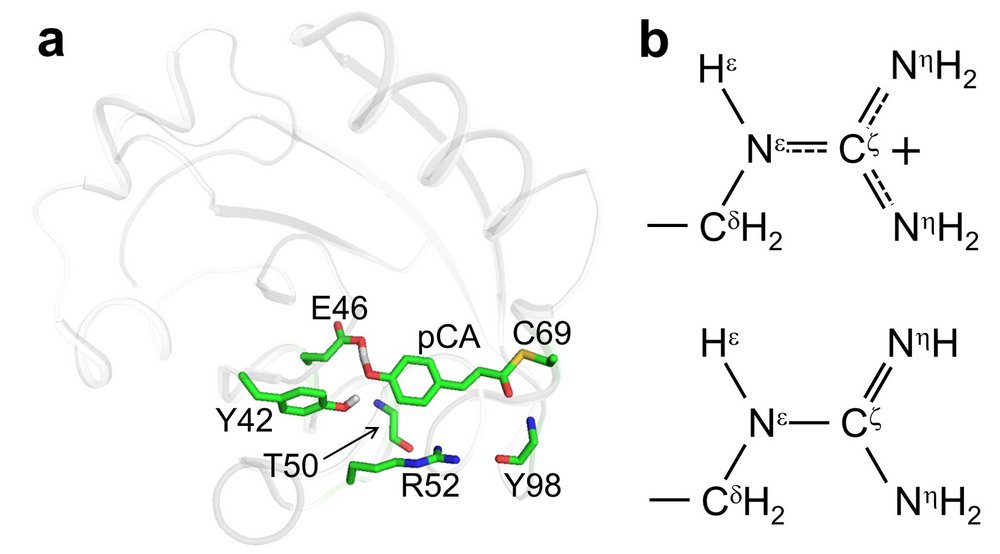 (a) Structure of PYP, showing the active center where a photon is absorbed (b) Chemical structures of the guanidinium (upper) and guanidino (lower) forms of arginine. http://onlinelibrary.wiley.com/doi/10.1002/anie.201609605/abstract

Protein side chains bestow uniqueness and functional benefit on all proteins. Among others, they determine the stability, the secondary and tertiary structure and topology of protein molecular structure, are responsible for surface complementarity in molecular recognition, and they constitute and position reactive groups for chemistry in enzymes. Knowledge of the protonation affinities of protein side chains is therefore key to understanding the physical molecular chemistry of biological processes. In the past, the group of Mulder has designed NMR experiments to determine the proton affinities (pKa constants) of several side chains, but an adequate experiment for arginine was lacking.

Mulder explains: "Arginine side chains were not on the top of my list. Almost invariably these are on the surfaces of proteins, and they are always protonated due their strongly basic character. However, at a meeting in the US some years ago I was very surprised to hear that in one protein – called Photoactive Yellow Protein (PYP) – neutron diffraction data from crystals suggested that an arginine side chain in the protein active center was charge-neutral. Moreover, this neutral form was suggested to play an important role in photocycle energetics and kinetics.

After the lecture, I approached the Japanese professor and suggested that we might determine the pKa constant for that buried Arg side chain using NMR spectroscopy. Frustratingly, however, whichever nucleus we looked at by NMR, we could not observe a titration. We could thus not establish if the active site arginine side chain was actually neutral also in solution. To know the answer, the 'only' thing we needed to do was count the number of protons on the head group of that particular residue. Either it had three (the guanidino form), or four (the guanidinium form) [see Figure]. This simple question turned out to be extremely challenging to answer, because arginine is a very curious amino acid, with a multitude of dynamic effects taking place.

There is exchange between different tautomer forms, chemical exchange with solvent water, and conformational exchange due to millisecond rotation around all three partial NLC double bonds. The result of all this, is that we can hardly detect a signal at all in standard 1H NMR spectra! The solution lied not in  detecting the protons themselves, but in asking the adjacent 15N nuclei how many proton neighbours they had. This can be done by observing the J-splitting pattern, something known to all chemistry students that have taken a course in NMR spectroscopy: For example, in 13C NMR spectroscopy, a single bound proton partner gives rise to a doublet, whereas two attached protons create a 1:2:1 triplet.

Post-doc Yuichi Yoshimura created an ingenious pulse sequence that leads to a 2D spectrum with 15N along one axis and 13C along the other, avoiding all the problems associated with 1H NMR. And against our initial hypothesis, both 15N signals of the head group displayed triplets, proving unambiguously that in solution the protonated form prevails in the active site of PYP. Although this result is encouraging, it leads to an important new question: How can there be such a big difference between solid and liquid state samples?"