The SPR technique exploits the fact that at certain conditions, surface plasmons on metallic slabs can be excited by photons and, thereby, transforming a photon into a surface plasmon. The conditions depend on the refractive index of the adsorbate.

The most common geometrical setup (the Kretschmann configuration) of SPR can be seen in Figure1 below. The incoming light is located on the opposite side of the metallic slab than the adsorbate. This is due to the fact that photons cannot excite surface plasmons on the surface being hit (it can easily be seen by comparing the curves of dissipation for incoming light, and for surface plasmons on the incident surface). The photons will however induce an evanescent light field into the metallic slab. Normally no transport of photons takes place through this field, however, photons incident at a certain angle are able to tunnel through the field and to excite surface plasmons on the adsorbate side of the metallic slab. Whenever a plasmon is excited, one photon disappears, producing a dip in reflected light at that specific angle. The angle, which is dependent on refractive index of the adsorbate, is measured with a CCD-chip. 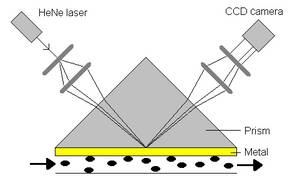 The advantages of the Kretschmann configuration are that it is not necessary to shine light through the adsorbate and it is easy to build (relative to other possible SPR-configurations).

The mass-resolution of SPR is in the order of nano-grams of molecules, and the surface plasmons typically extend in the order of 200nm into the adsorbate. Thus, 'sensing' a weighted mean refractive index of this volume.

Current uses of SPR at iNANO

At iNANO SPR is mainly used to measure the change in refractive index, during adsorption of cells and proteins. From these data, properties such as mass and thickness of adsorbed layers can be deduced. Also conformational changes in the internal structure of the layers can be seen, which is invaluable information in the exploration of binding-behaviour of proteins and cells.